The European Eel Anguilla anguilla is a teleost fish (bony skeleton) and belongs to the super order Elapomorpha and the family Anguillidae.  There are 15 species and 3 sub species belonging to the genus Anguilla and are found in all temperate and tropical waters except South Atlantic and East Pacific waters.

Eels are a European protected species and are listed as a critically endangered species.  They are also protected by the Fish Conservation (Prohibition on Fishing for Eels) (Scotland) Regulations 2008 and Salmon and Freshwater Fisheries (Consolidation) (Scotland) Act 2003 such has been the level of decline over recent years.

The Eel has a complex life history, it is a catadromous species (spends most of its life in freshwater and migrates to sea to spawn) as opposed to the Salmon which is anadromous. The European Eel is found in fresh and brackish waters all over Europe including the Baltic, Mediterranean and North Africa (Tesch 1977).

Eels are thought to spawn in the Sargasso Sea between Bermuda and Cuba; this is approximately 5000km from British coasts. Details of the exact location are unknown as a mature Eel has never been found in this area. The site/area of spawning can be traced back from the presence of progressively larger larvae found at increasing distances from one point source in the Sargasso Sea. It is thought spawning takes place from March – June within a narrow ellipse extending East -West from approximately 48o – 74o W between 23o – 30o N.

The presence of a single spawning location and genetic evidence suggests that Eels are panmictic (from one stock with random mating at a singular spawning location at one time). It has also been suggested that there may be 3 minor sub populations due to variations in location, timing and genetic evidence. These are Northern European, central/Mediterranean and North African (Tesch 1977).

Within days of spawning the eggs metamorphose into transparent blade shaped larvae – Leptocephali and passively drift on the Gulf Stream and North Atlantic drift current at depths of 50m – 300m. As they reach a length of >5mm they change to an active vertical migration, catching currents travelling across the Atlantic. They move between the shallow, warmer waters 35m -125m depths at night and deeper, colder depths 300m – 600m depths during daylight.

Development of eels from larvae (leptocephali) to eel at beginning of pigmentation (Tesch, 1977) 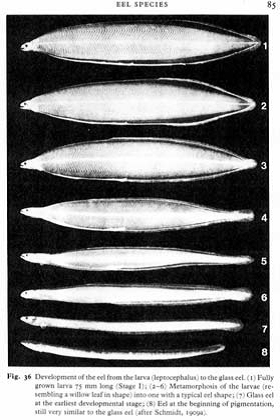 In November – April after approximately 8-9 months they reach the continental waters between South West Europe and North West Africa. At this point they are approximately 50mm ( < 1g) It is here they take on the usual Eel – like appearance although they are not pigmented and are known as “Glass Eels”. Most of the 2000 million Glass Eels move in via the Bay of Biscay. They are driven in to coastal waters and start to darken; they are then known as Elvers, 50mm – 70mm in length or 2500 – 3000/Kg. 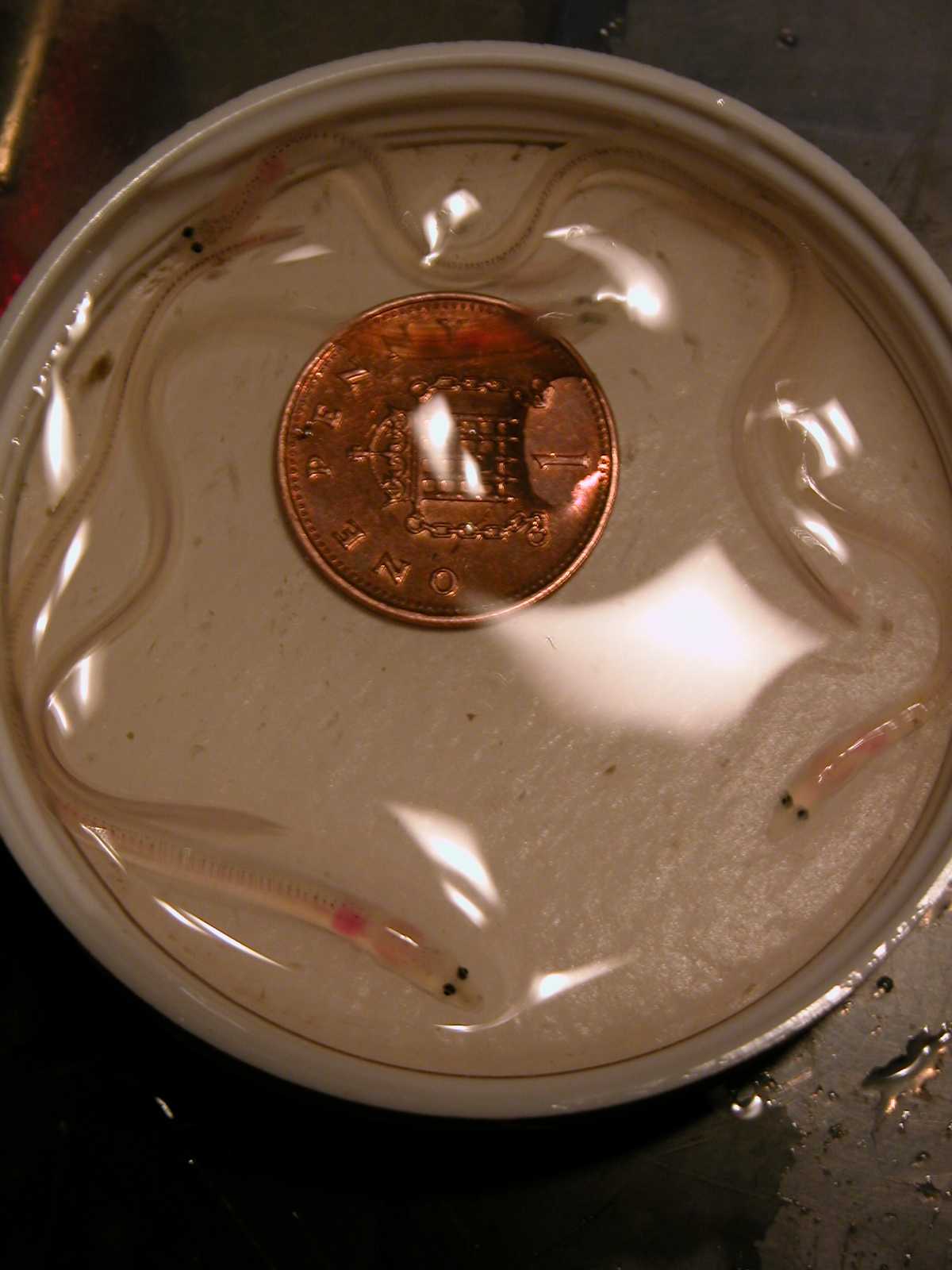 Glass Eels collect in Estuaries and close to shorelines; this is determined by a number of factors including proximity to continental shelf, wind, tides and currents. At this point there is a clear shift in preference to salinity:

During the transitional period elvers collect under stones and mats of Bladder wrack.  The majority of elvers migrate into fresh water but otolith microchemistry studies have shown that a small percentage spend their entire life in the sea or between freshwater and sea.

Once full pigmentation has taken place and elvers are near river mouths they adopt an active vertical migration process, rising up on a flood tide and carried further up the estuary. This is triggered when estuary water temperature reaches 10oc – 12oc and inhibited if the range in variation between sea and fresh water is >3oc

Once they have entered a river, they undergo a rapid dispersion upstream driven by density at point source. This process probably takes 5 years or so as more 1- 5 year old Eels are found moving over weirs than older Eels. During this phase young yellow Eels or “bootlaces” start a number of metabolic changes. They turn olive/brown on top with yellow or silver/yellow belly by 130mm they are then known as “Yellow Eels”. These are fully adapted to fresh water, they produce slime, are able to breathe to some extent through the skin and produce a toxin to deter predator. 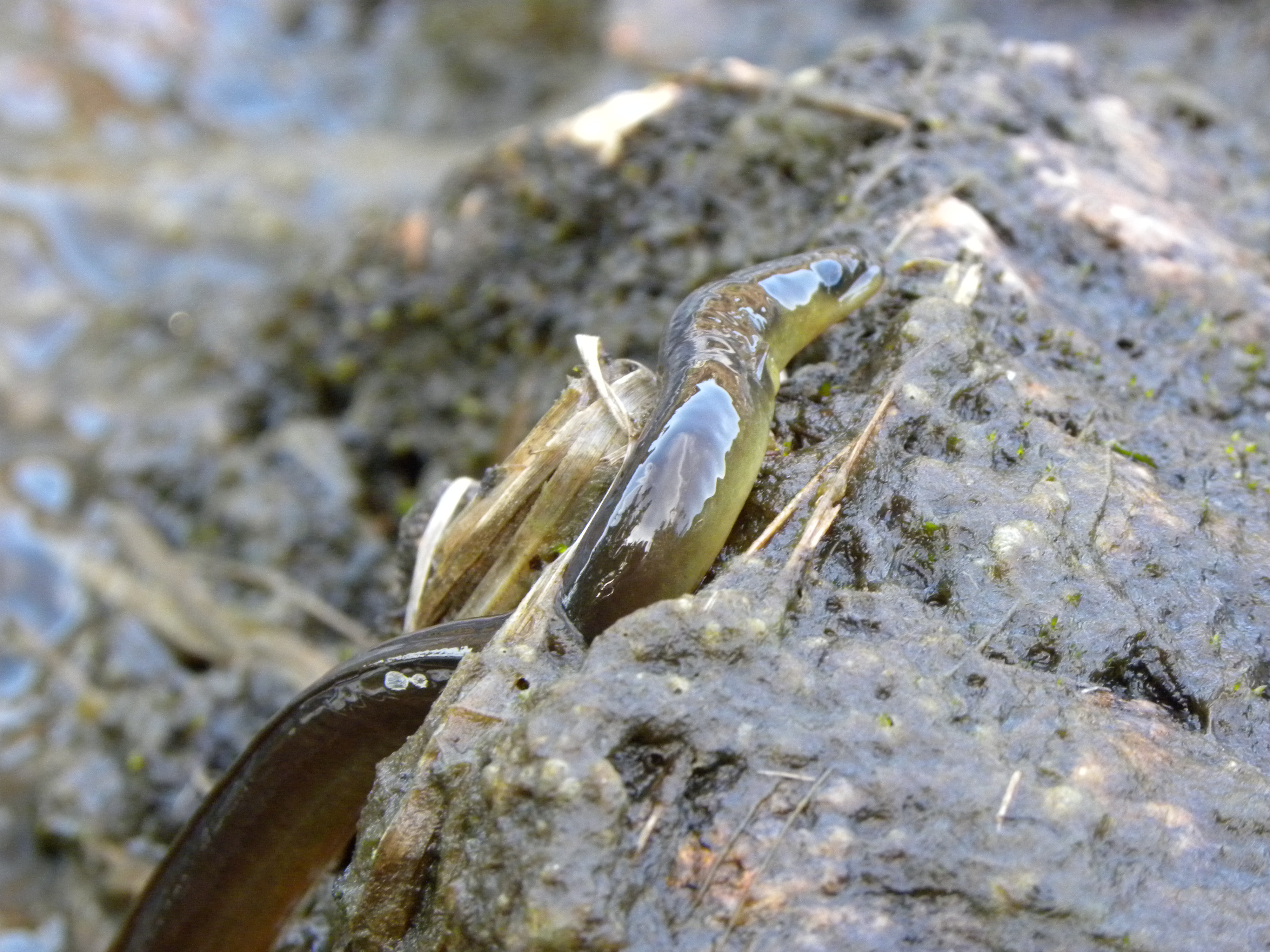 After this initial phase a slower dispersion phase occurs, this is similar to a random diffusion of particles. Yellow Eels display a sedentary lifestyle and slowly disperse into areas of low Eel density. By day the Eel spends most of its time lying in holes, lying flat in the mud with the upper part of body upright feeding at night on a variety of animal foods. Yellow Eels display sexual dimorphism in size/bodyweight with age, as males mature at a smaller size to females and larger older Eels further upstream tend to be female as they have had longer in the system to disperse upstream.

Eels >300mm seem to undergo behavioural changes with a preference for micro-habitats. Small Eels prefer shallow habitats with a strong abundance of aquatic vegetation whereas larger Eels prefer intermediate to deep water with less vegetation. This means that population density and sometimes size distribution can vary depending on depth of the water body. In Ireland, highest concentrations were found in shallow waters 1m – 3m deep. Distance from tidal limits, altitude (few Eels found above 100m) natural and man-made barriers, habitat productivity and especially daytime refuges were found to be main factors when determining density, biomass and population structures. Largest Eels were found in upland alkaline lochs. 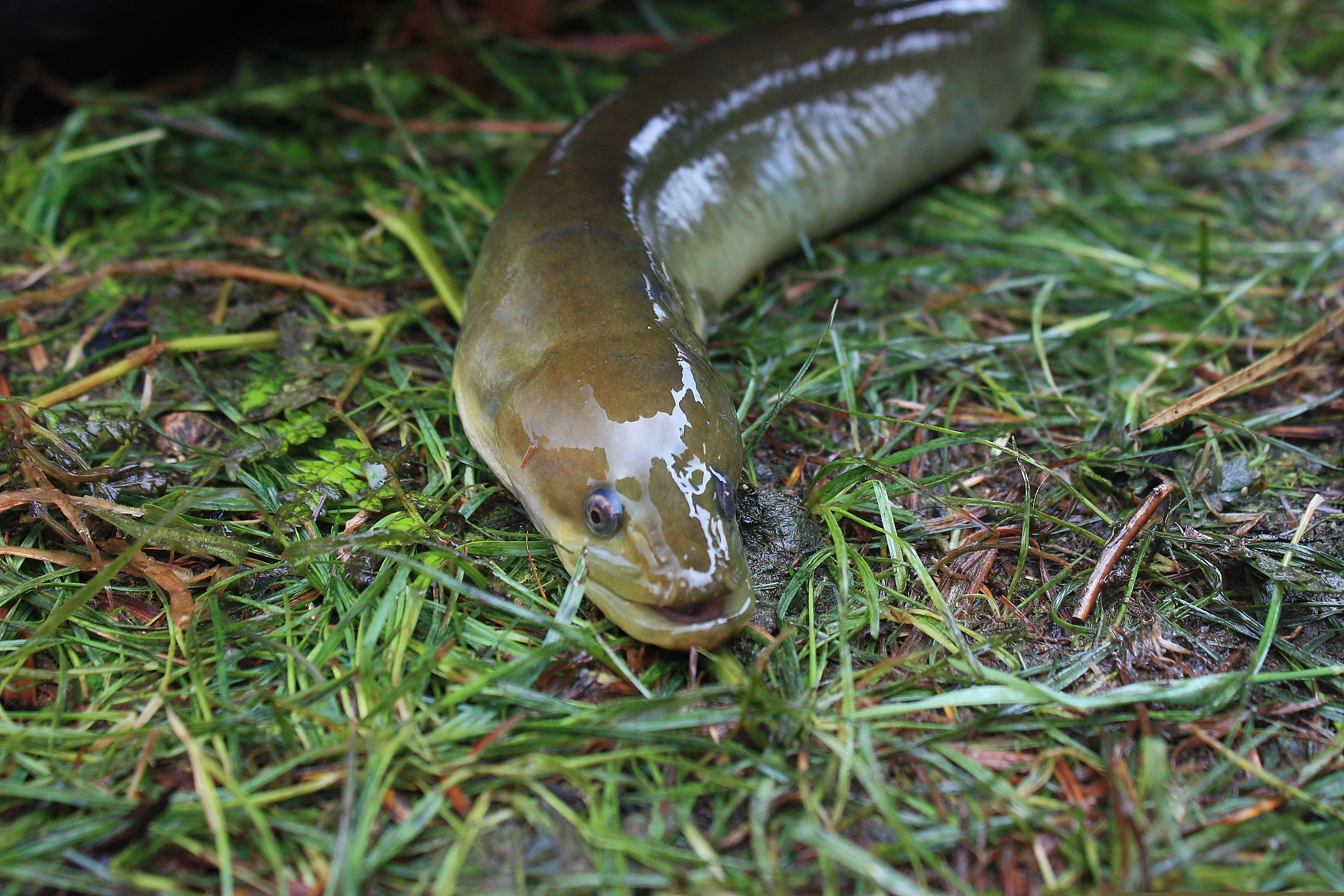 In colder climates (Scotland) Yellow eels may hibernate over the winter period and as a result of this or seasonal migration patterns fewer and smaller Eels are active early in summer than later. In addition there is great spatial variation in distribution, Eels are much less likely to be absent from North West Scotland, this is due to proximity to the continental shelf. Mean density is estimated at 4.33 Eels per 100m2 this is lower than in England  due to  lower temperatures and poorer feeding. However, West Sutherland and the Western Isles have densities much greater than this (Tesch 1977).

Once the Eel has stored enough body fat (approximately 1/3 of its total bodyweight) it becomes partially mature and undergoes more physiological changes. This is a gradual process and takes place between spring and September. During this “Silvering process” the Eel becomes dark grey/green and sometimes even blue on top with silver flanks and belly. The eyes become larger and more spherical with a change in retinal pigments from green sensitive to blue sensitive; it is assumed this is for deep sea vision. The pectoral fins become large and pointed as opposed to paddle shaped.

A silver eel captured on its way to the sea

Note the enlarged eye on this silver 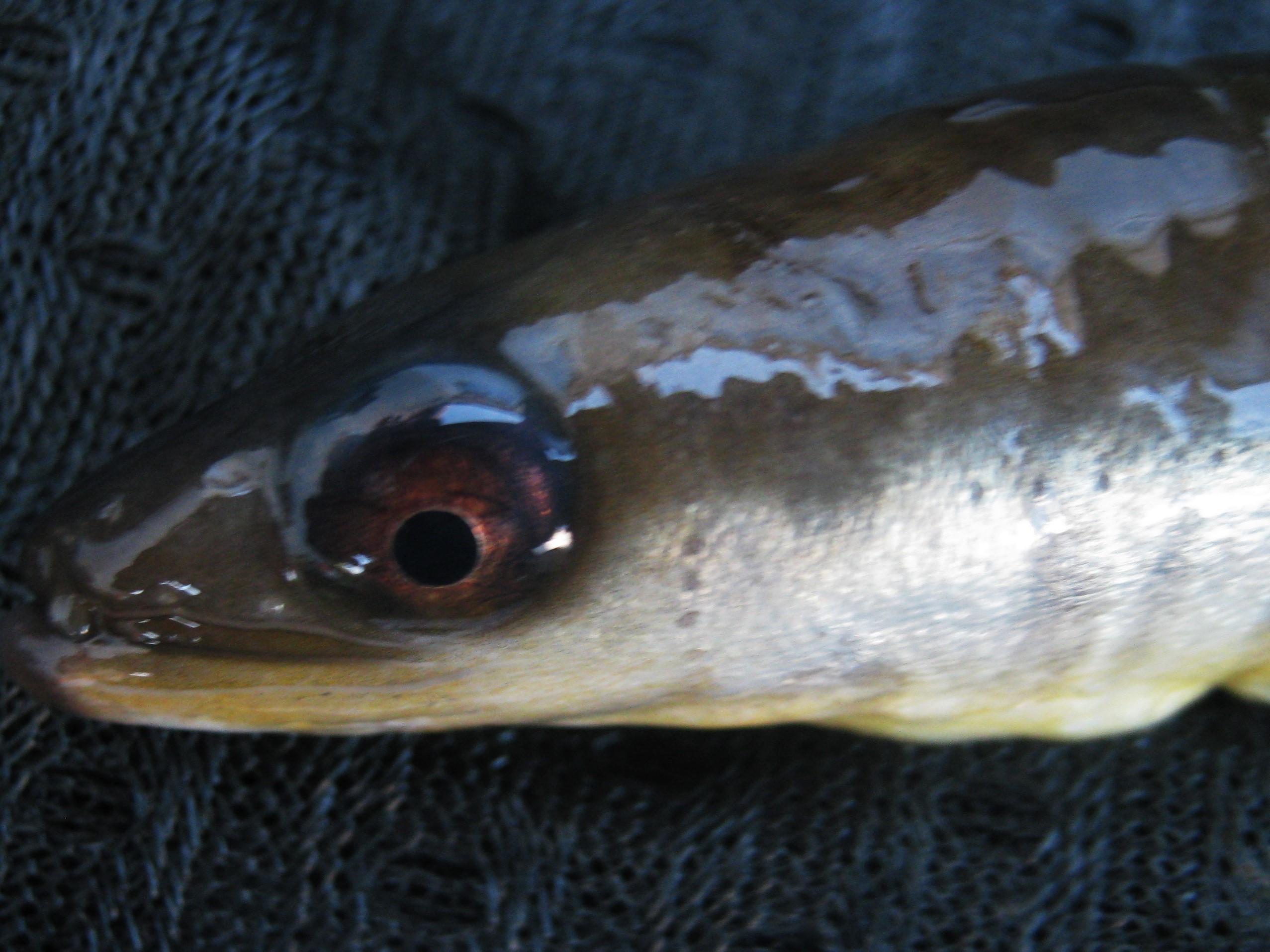 Feeding reduces also as the gut is absorbed and gonad development begins. Silvering is initiated by a marked peak in growth hormone in early spring, the different events and changes occur throughout spring and summer so that by September all silvers have the typical features. As the temperature drops, feeding ceases altogether leading to migratory movements to the sea.

In the highlands of Scotland, eels were identified as 10 – 40 years old on average with 51 years being the oldest recorded, maturing between 17 – 27 years old and reaching a weight of 0.55 Kg in 17 years. In 2006 the average Silver Eel size recorded in Wester Ross was 371.3mm. Some studies have suggested that the current growth rate for Scotland is 13-14mm per year with males maturing at 25+ years (330+mm) and females at 31+ years ( 420+mm ). The mean Eel length in North West Scotland between 1996 and 2006 was 221mm; this is smaller than the East coast and is due to density dependant growth and higher recruitment.

There have been few observations of Eel movements once they leave the coast but laboratory experiments have shown that Silver Eels have a heightened magnetic orientation towards the Sargasso Sea in autumn. Energy balance studies using swim tunnels have shown that Eels have the capacity to use fat reserves for constant swimming, day and night for at least 6-7 months (and 5533 Km in 117days) only burning 19.7 % of bodyweight.

Silver Eels are thought to swim at depths of >200m, making use of the cold Canaries current (<10oc) and the North equatorial currents. At these lower temperatures gonad development would be slow enough to keep the Eel streamlined enough to make the Sargasso in 6-7 months. Although this is all hypothetical it would place the Eel in the Sargasso in March-June in time for spawning (Tesch 1977).

When the eel reaches the Sargasso it has to pass through the Sub-tropical convergence zone, this is where warmer Southern waters collide with colder Northern waters forming a natural boundary of water types. On crossing into warmer water, odour imprinting (like in Salmon) may cause Eels to stop migrating, gonad development rapidly increases causing a release of pheromones which would attract other Eels and cause them to congregate and spawn. Spawning is thought to occur at depths of between 100m and 300m, each female produces approximately 2-10 million eggs. Spawning is collective, simultaneous and possibly triggered by pheromones. The Eel is then said to die and the lifecycle is complete.