The complex and fascinating lifecycle of the salmon is best described by the Atlantic Salmon Trust and Robin Ade in their illustration entitled ‘Atlantic Salmon Lifecycle’.

Salmon are believed to navigate across the open sea using the earth’s electromagnetic field and celestial cues. Once in coastal waters they locate their natal river using an acute sense of smell. Salmon return to the river throughout the year, with distinct peaks in numbers referred to as ‘runs’ when specific ‘components’ of the salmon population enter the river.   Once in the river adult salmon do not feed and instead live on their fat reserves. 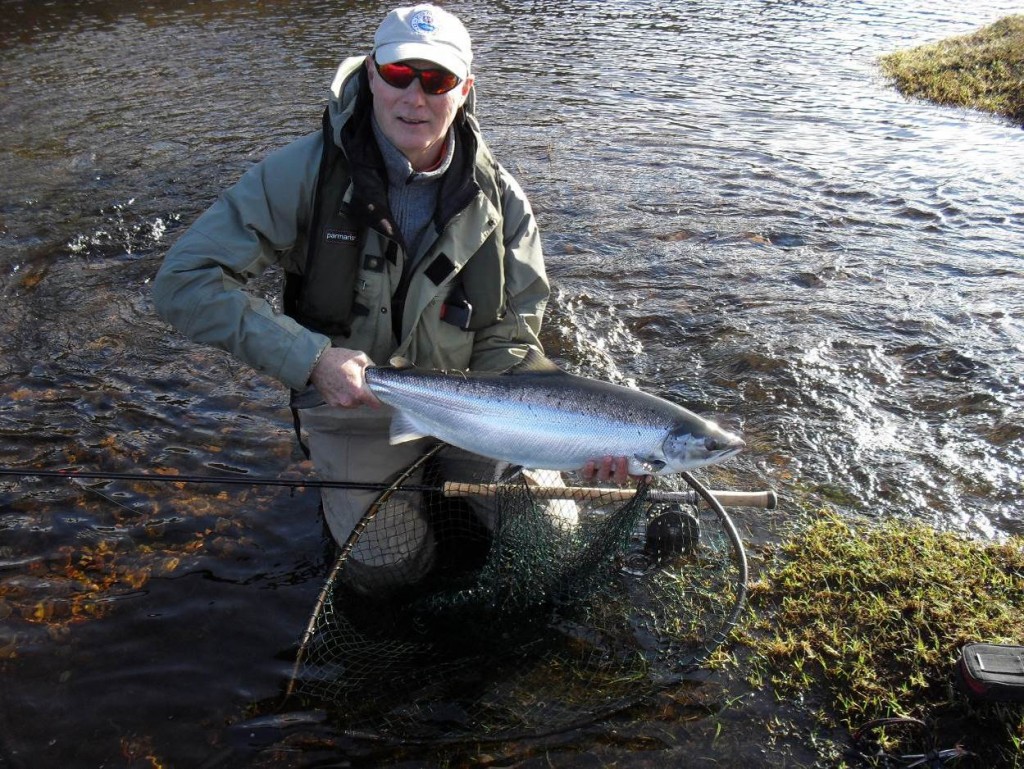 The ‘spring’ component of salmon may spend up to a year in freshwater without feeding. After a few weeks they lose their bright silver appearance and develop their breeding colours. The females (known as ‘hens’) turn a dark grey/brown colour with tinges of blue and purple along their side and gill covers (opercula). The males (known as ‘cocks’) turn deep orange and red in colour and develop a hooked lower jaw known as a ‘kype’.

A ‘coloured’ salmon from the River Ness 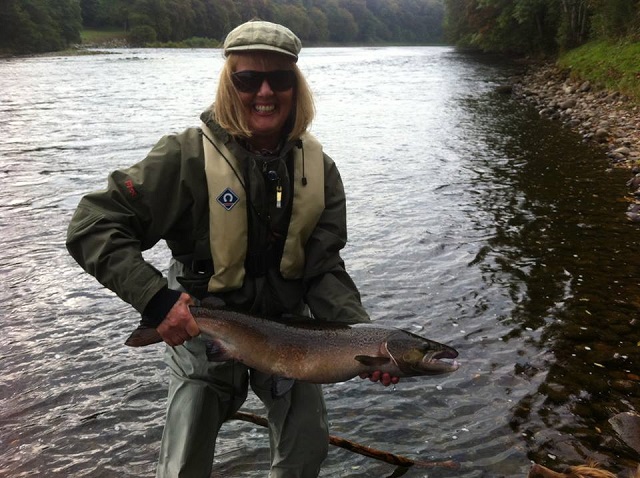 By late autumn the salmon have reached the area of the river where they were born. Spawning usually takes place sometime between October and January depending on local conditions. The hen fish selects an area with a suitable gravelly substrate and uses her tail to excavate a nest or depression in the bed of the river. She then proceeds to deposit her eggs in to the nest, which are simultaneously fertilised by at least one adult male (and often precocious parr) as they are released. The hen then moves upstream of the nest and used her tails once again to displace gravel and cover the eggs in what is known as a salmon ‘redd’.

Adult fish that survive the spawning process as called ‘kelts’. These fish drop back through the river system and return to the sea during the spring. A small proportion of these may return to spawn for a second (or even third) time, many of which will be large females.

A hen fish of 10lbs in weight will produce approximately 5,000 eggs. Many of these will be washed away during the spawning process or during severe floods. Those that survive remain in the gravel throughout the winter and early spring period. When newly hatched the young fish are referred to as ‘alevins’. These have a ‘yolk sac’ attached to their underside which acts as a food source. The alevins remain under the gravel until their yolk sac has been absorbed, after which they emerge from the gravels as free swimming fry. 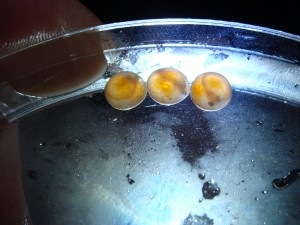 The fry begin feeding on invertebrates, with their growth rates being dependent on water temperature and the availability of food. Mortality is high at this stage as they compete for feeding territories. By the end of the summer they will have reaches a length of approximately 30mm to 50mm depending on the productivity of the burn.  Once they have grown above fingerling size and developed their spotted colouration and thumbprint like dark marks along their sides they are known as ‘parr’. They will remain in the river for two or more years depending on their growth rates. 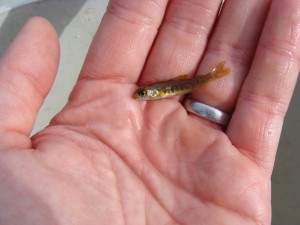 In the spring the largest parr change to a silvery colour and become ‘smolts’. They begin to drift downstream in shoals towards the sea. Once at sea the smolts head north to their feeding grounds off the Faroes, the Norwegian Sea and Greenland.

An early smolt from the River Garry 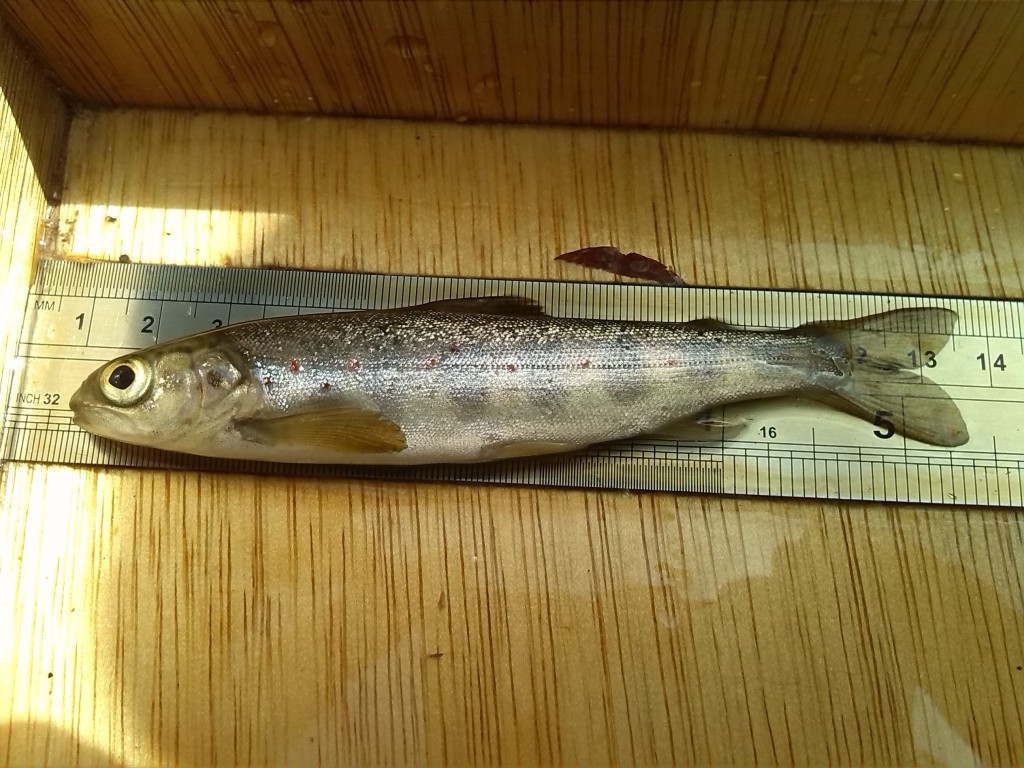 The diet of salmon at sea consists of crustaceans and fish such as sandeel, herring and capelin and lantern fish.  Those fish known as ‘grilse’ will return to the river as mature adults after just one year weighing somewhere between two and seven pounds. Those fish that remain in the sea for more than one year are known as ‘multi sea winter’ salmon. The survival rates of salmon at sea are heavily influenced by ocean currents and the availability of prey items, both of which can vary significantly from year to year.

Many of the skeletal structures of fish such as scales, otoliths, opercular bones and fin rays exhibit growth rings. These rings are formed annually due to seasonal fluctuations in growth and so can be used to give an indication of the age of a fish.

Annotated photograph of a scale taken from a 2.2+ year old River Ness salmon 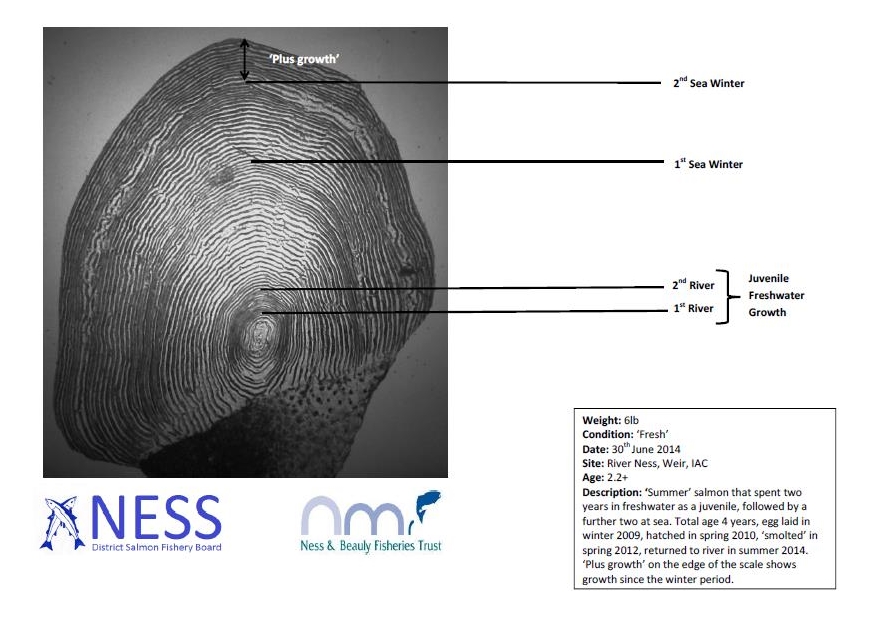 Scales are usually the chosen structure because they can be sampled without sacrificing the fish. Growth patterns can be related to production, environmental trends and timing of physiological changes such as maturation, smoltification and spawning can be identified. This information, combined with sex and size data, can be used to inform management decisions within a fishery.