‘Pearls in Peril’ is a LIFE + NATURE project co-funded by 22 organisations across Scotland, England and Wales. This exciting new nationwide project will act to safeguard important populations of freshwater pearl mussel (Margaritifera margaritifera).

The project spans four years from 2012 to 2016. In that time, a wide range of conservation measures will be implemented in key river systems. The measures will aim to:

Best practice methods will be used to secure freshwater pearl mussel populations and some of these actions include:

A total of 21 rivers across Britain are involved, all of which are NATURA 2000 sites and are designated as Special Areas of Conservation (SACs):

Ness and Beauly Fisheries Trust are involved in a number of project actions relating to the River Moriston in the Ness catchment. These include ‘Pearls in the Classroom’ ( see our ‘Education’ page) and ‘Glochidial Encystment and Monitoring’.

Freshwater pearl mussels reproduce by releasing millions of microscopic young (glochidia) into the river in late summer. These glochidia attach (or ‘encyst’) to the gills of young salmon or trout (without causing them any problems) and remain there throughout the winter. They drop off the following spring at the size of a ‘pin head’ and settle in the river bed were they grow to adulthood.

As pearl mussels do not reach maturity until at least 12 years old (and can live to be over 100 year old) the age-structure of a population is vitally important. The presence of juveniles (a feature essential to the long-term sustainability of mussel populations) is a clear indicator a healthy habitat required for the survival and reproduction of the species.

The aim of this part of the project was to monitor the natural encystment by freshwater pearl mussel glochidia on Atlantic salmon and brown trout juveniles in the River Moriston and to investigate which species of fish are used as hosts.

The methodology required a sample of fish to be caught using electro-fishing at various sites along the river. The fish were anaesthetised and their lengths recorded. The gills were checked for the presence of glochidia using a hand held microscope, with the numbers present being recorded. A total of 42 salmon and 5 trout, together with numerous minnows were caught. On this occasion no trout were found to be encysted, however the sample size was small.

Samples of 10 to 20 mussels were inspected at four locations on the River Moriston in between June and August 2014. The mussels were carefully examined in order to detect the presence of glochidia and to ascertain the reproductive condition. Two methods were employed;

The reproductive condition was ascertained using the descriptions in the table below;

A syringe was gently inserted into the glochidial sac and a small amount of glochidia drawn off. These were then observed under a field microscope.

Glochidia from Moriston Mussels Under the Microscope 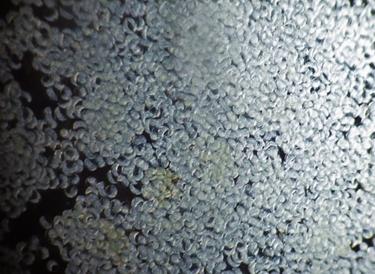 Five stages of development have been identified and are listed in the table below:

As a result of the glochidial development monitoring, the probable ‘spat’ (or release date) was identified. Groups of ten mussels were then placed in buckets containing river water. Within 5 minutes mussels started to release glochidia into the buckets. After spatting all mussels were returned to their original location within the river, with the water containing the glochidial suspension being retained.

A total of 40 mussels were used in this process. The glochidia and water were then mixed and split between three containers, one for each of three electro-fishing sites. At each site juvenile salmonids were captured. The fish were then placed in a large container holding the glochidial suspension.

Fish in holding container with Glochidia 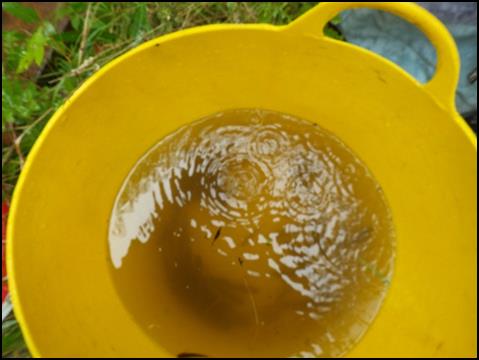 All fish were held for ten minutes within the suspension where they inhale the glochidia. All fish were then returned to the river along with the remaining glochidia/water (it was hoped that the glochidia would attach to any other fish within the vicinity). A total of 150 fish were encysted of which, 38 were salmon and 112 were trout. 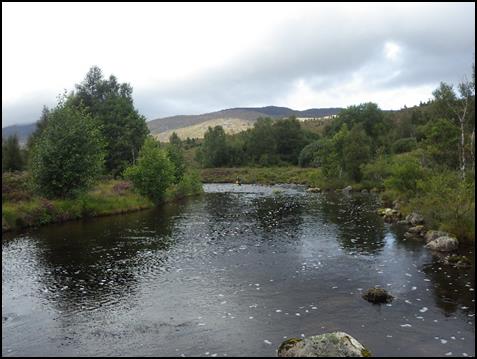